This is Clare (some spell it Claire) of the anime/manga Claymore, the figure is by Megahouse. When I first started REALLY keeping tabs on figures last winter I had missed pre-ordering 2 figures that I was very woeful over missing. The first was the Revy by Alter (there are highly unofficial rumors that Alter will re-release Revy) and the 2nd was this figure. Since Megahouse was re-releasing their One Piece line I sat and waited hoping that maybe this Clare to be re-released…and after many months I cracked and bought her from a seller in Japan. I had decided the risk of losing this figure forever was heavier then the risk of paying a bit more and then having her re-released at retail value. There aren’t very many figures I’d crack over and pay almost twice the pre-order value of, but this Clare is DEFINITELY one of them and I’d do it again if something (god forbid) ever happened to my current Clare figure. This is my favorite figure in my collection, not only is it of one of my favorite protagonists, but I think she was captured exceptionally well by Megahouse. 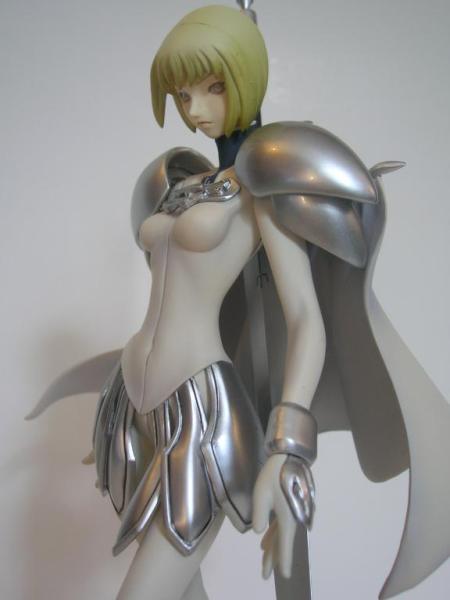 I had pre-ordered the Toysworks Clare but felt a sick feeling in my stomach over it because I felt that the Megahouse version I had missed was by far the superior version. I kept tabs on eBay but Clare kept selling for $130+ and I would howl in despair every time an auction ended at a high price. I had found a seller that seemed reliable, had 100% positive feedback, was located in Japan, and had positive feedback for about 5 other Clares he had sold at over $130. He had just opened a store and had her listed at $90 Buy It Now on the store. So I decided I’d spend the extra money to get the figure of Clare I REALLY wanted and cancel the Toysworks one.

For all those concerned that I’m a schmuck that bought a bootleg don’t worry, I’m pretty comfortable with my ability to detect bootlegs on eBay. Although despite this I rarely use eBay these days since I pre-order so much.  I also researched tell tale signs of a bootleg Clare specifically, so when she arrived I put her through some tests. Plus as someone who was naive and accidentally bought bootlegs in the past, and then bought the real thing, I have a general feel for something that is of inferior quality. But the best test you can probably do is to post a picture of it on your figure forums, if something seems odd someone will definitely say something.

Alright so I said this is my #1 favorite figure and it’s true. I LOVE Clare, Claymore was the first shonen manga I got into (before I had only watched Shonen anime) and it was all because of Clare (and Teresa). But I’m probably biased in favor of this figure because I so adamantly admire Clare, her battles are amazing and her purpose is for revenge! I love tales of vengeance! Especially when the vengeful one is someone as cool/calm/collected as Clare is. 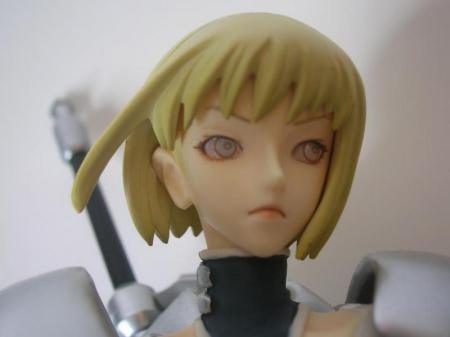 In this figure you just know that Clare is a completely serious warrior, despite her skintight outfit and blonde hair. She looks like a goddess of war in this figure, you can tell there is something not quite human about her in the figure. Even on my shelf with many many figures I think Clare stands out the most, whether it’s the light catching her armor or her serene and ethereal pose and expression that makes her stand out from the rest. Not to mention the fact that her whole outfit is essentially 1 color really stands out because all my other figures have lots of colors and details in their outfits. However, I won’t claim this figure doesn’t have its minor flaws. It’s just hard for me to focus on the minor flaws when I love everything else about the figure so much! Some flaws might be the noticeable mold line in her hair and the fact that from some angles (close up) something about her eyse doesn’t seem EXACTLY right.

After the figure shoot was done I realized I forgot to take pictures of her with her other arm. I don’t display her with her other arm because I value the symmetry of this figure. Usually I actually prefer figures with unsymmetrical quirks but in this figure I prefer Clare as an untouchable goddess/warrior. And somehow the arm wrapped in leather seems to bring her down to a level beneath that. The arm is done well though…you could just say it’s an artistic preference on my part. 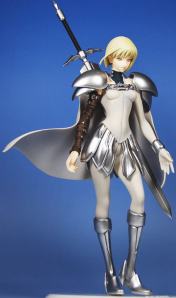 I highly recommend this figure! I think this figure is an example of Megahouse at its best! Megahouse seems to try its best to perfectly reflect the look and personality of their characters and I think they hit the mark better then anyone else on Clare! Although probably only those (like me) with a deep love of Claymore (the manga) and the character (Clare) would be willing to spend over $90 on her.

This entry was posted on Monday, October 20th, 2008 at 1:46 pm and is filed under Figure Reviews. You can follow any responses to this entry through the RSS 2.0 feed. You can leave a response, or trackback from your own site.