Getting Older and Video Games

I remember when I first started playing video games in junior high (I was a late video game bloomer) I would beat a game, and then beat it again…and sometimes even beat it again! A lot of these games were 40+ hour RPGs too, and I would try my hardest to do EVERYTHING in the game. I had a lot of time to burn and a lust to play video games. But alas I could only get 1-2 video games twice a year (Christmas and my Birthday). I dreamed of the day when I would have enough money to buy a whole haul of games and play new games all the time! Well that time has come…but not how my junior high self hoped it would.

I can now afford as many video games as I want, and if I cut back on figures/manga I could afford all of the newest consoles and all of the newest games. But I don’t have as much time to play video games anymore. I’m well aware I already own way more games then I have time to play, but the junior high kid in me can’t help but scream out to “BUY THAT GAME! You’ll make time for THIS game!” over and over and over. And the end result is a PILE of games waiting for me to play with them. My only comfort is that (on The Backloggery) there are people who have way more unplayed games then me. 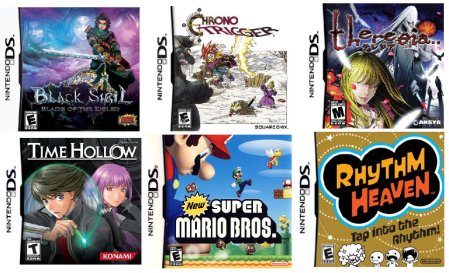 I know it’s just going to get worse too, after having a family (someday) is there any hope for me and video games? I hope so. One guy at work mentioned if he has to sit with the baby for a long time he can play some games on his PSP for a bit. As I get older I get the feeling that my focus is going to shift from the TV console games I love to something more portable to fill in little spare moments. Actually the inspiration for this post was that after only buying 2 games in the last 6 months I crumbled and bought 6 games for the DS yesterday…I went into Gamestop because I wanted to play Time Hollow and the prices it was selling at used online wasn’t low enough for me, so I wanted to track it down new at $30 (CA-CHING!!). And then I remembered I’ve been wanting to buy New Super Mario Brothers so my boyfriend would have a new Mario game to play when he borrows my DS (CA-CHING!!). I saw a handful of yummy looking DS games I had never heard of before and I went home and researched them a bit…and then I bought them on Amazon, Theresia (CA-CHING!), Rhythm Heaven (CA-CHING!), and Black Sigil: Blade of the Exiled (CA-CHING!). I’ve also been wanting Chrono Trigger for a while and decided to just add that on too (CA-CHING!).

The solution…if I had a time machine capsule I would buy lots of games and send them back to myself. Back to the time when I would have the most time and appreciation for what was in front of me. Now, I wouldn’t send back stuff that didn’t exist at the time (like a DS) because I might find myself screwed if someone discovered complete gaming systems that are still in development at Nintendo/Sony. But I’d track down a bunch of cheap PSX and N64 games and send them to my old self. There are still a lot of PSX games I didn’t have the money to play that I’d love to play.

Although I know I’m in good company in my video game situation, so many of my gamer friends do exactly what I do. We act like little kids who have been given a big allowance. Maybe I’ll play all these video games when I retire, or as my boyfriend put it “I hope there is a really good MMO out when I retire”.

This entry was posted on Monday, April 13th, 2009 at 1:02 pm and is filed under Random Stuff. You can follow any responses to this entry through the RSS 2.0 feed. You can leave a response, or trackback from your own site.

12 Responses to Getting Older and Video Games