This figure is of Reiri and Riza from Princess Resurrection, the figure is made by Happinet. This is my first Happinet figure, not because it was the first one I was interested in but because this was the first one I found at a price I was willing to pay (half off). Happinet tends to charge a lot for most of their figures ($70-$90 range) and I’m only willing to pay that much for something very special that is usually by Alter or Max Factory and is of a character from a series I love.

PS – Please forgive the yellow hue to the lighting, I’m very dependent on natural light and now that the days are getting shorter I can’t use naturla light as much. It’s hard for me to use artificial lighting correctly, I’ll get better.

From what I’ve read a lot of people were attracted to this figure but the small scale of the characters combined with the high price tag scared them off. The entire figure is about the size of a standard 1/8th figure but it’s very true that the characters themselves are probably a smaller scale then 1/8th. I took a picture of Reiri/Riza next to my most common figure (my Max Factory Haruhi) to give some idea on the size. 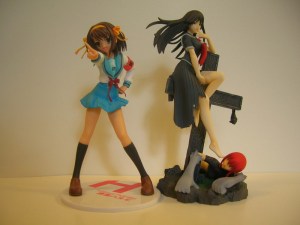 Although the characters themselves on the figure are smaller than 1/8th I really wouldn’t want this figure if it were any bigger. I feel there is something to be said over a small but nice quality figure…not to mention my shelf space is filling fast. 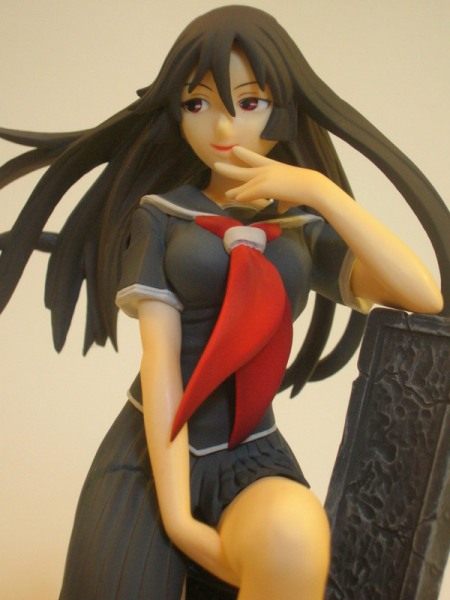 I really love Reiri’s Sailor Fuku, I didn’t have any figures of such a nice and classic school uniform, it looks even better battle damaged. I like her pose, long flowing hair, and facial expression a LOT. I’m fond of strong female characters and she is just radiating strength and beauty. Not to mention she is a vampire, lately I’ve had a fetish for vampire characters. The use of scenery on this figure is just amazing. I don’t consider it a single figure,it’s more like an eye catching piece of scenery. The level of detail in this figure really is great. I wish there were more figures that tell a story like this one. 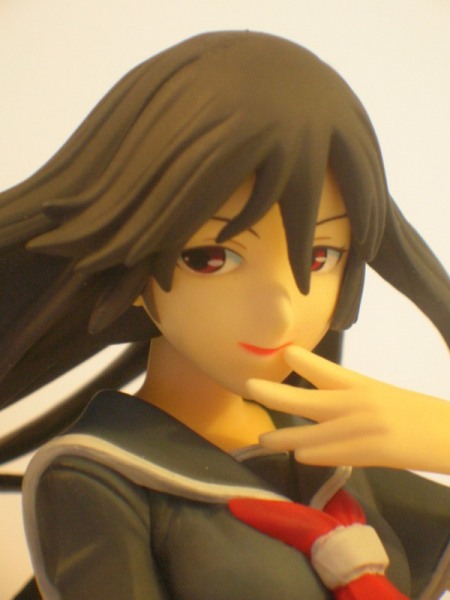 The only flaw I found was that there was a bit of bleeding of red paint on her left eye, but it’s only noticeable if you twist her at an angle and look close. Because her pose has her looking to her right with her hair in her face it’s really not noticeable at all.

Not only was Reiri done in great detail but so was Riza the werewolf. If you put this figure on a lower shelf it’s easy to not notice the level of detail that was put into Riza. I made sure to put this figure at eye level so all the details can be appreciated right away. This figure helps to add diversity to my collection and I’m so happy I got to own it. I had my eye on this figure for a while but I had never purchased a Happinet figure before and I wasn’t willing to risk spending $75 on the figure and having it turn out badly.

This is a great figure that I love and I’m thrilled I bought it…although even knowing what I know now about how awesome this figure is I’m still not sure I’m willing to pay $75 for it. If I watched and loved the anime prior to getting this figure I’d probably be willing to pay retail price.

This entry was posted on Thursday, October 2nd, 2008 at 3:06 pm and is filed under Figure Reviews. You can follow any responses to this entry through the RSS 2.0 feed. You can leave a response, or trackback from your own site.