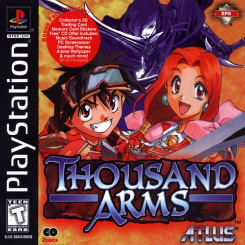 Thousand Arms was one of my first video games…I had just played Final Fantasy 8 and 7 and I wanted to play another game on my Playstation. I bought it on impulse because the cover looked so much like anime…I’ve matured since then about how I choose video games but I’m still very glad I got Thousand Arms, it was the begining of a loving gaming experience between me and Atlus.

What I liked the most about this game was that it had a dating/social aspect to it, something that was almost unheard of being released in the U.S. back then. This game also is one of the few RPG games I’ve ever played with a decent amount of humor to it. The dates sometimes were laugh out loud funny. When the girl would as a question and I had to answer there was usually at least 1 ridiculous response I could give. At one point Meis hints at a night of sex with a female character during a date, and she states that “the game isn’t rated for that.” I remember I was actually laughing at that statement because I simply wasn’t expecting them to recognize the fact that it’s a video game like that. Plus that was a pretty outrageous statement to a middle schooler who had only played Final Fantasy games up until that point. But honestly I still find it funny 🙂

So what on earth does the dating thing have to do with saving the world? Meis is a ‘Spirit Blacksmith’ and to increase the power of his weapons, Meis must have the help of a woman, he must increase his ‘intimacy level’ with her by going out on dates and giving the right presents. The higher the intimacy level the better the weapon. Also if I recall right each woman had a certain element to her.

Combat in Thousand Arms is turn based with three party members. But only the front character is actually able to physically attack the enemy. The other two characters serve in a purely supporting role, taunting the enemy and utilizing certain items or spells (the enemies have the exact same setup that you’re forced to have). This is pretty much the opposite setup of AR Tonelico where you had 2 attackers and 1 member acting as support.

I enjoyed the cartoonish graphics quite a bit but they weren’t anything too impressive even back then so by today’s standards they’re completely outdated. They do use a bit of CGI in the background and cutscenes pretty much just look like regular anime. This was the first game I ever played with voice actors too, I was horrified to hear voices on my characters at first but I got used to it.

Who do I recommend this game for? Anyone who liked AR Tonelico, this dating setup is far more funny and done in a way that is far less weird. I’d also recommend it to any gamers that are fans of Atlus. It’s a unique game that I treasure but it’s certainly not for everyone. 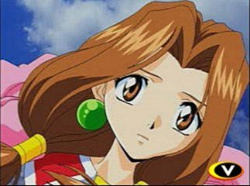 This entry was posted on Wednesday, August 20th, 2008 at 6:53 pm and is filed under Video Game Reviews. You can follow any responses to this entry through the RSS 2.0 feed. You can leave a response, or trackback from your own site.