So I just got a figure set that I’ve been highly anticipating for a LONG time 🙂 as you can guess it’s the Limited Set of Shrine Maiden Tsukasa and Kagami by Wave! I pre-ordered this set for $80 at a time where I would only spend a max of $30 on a figure. THATS how hard I fell for this set! It was also the beginning of a downhill tumble of continuously raising my MAXIMUM amount that I’m willing to spend on a figure! Although with this one I soothed myself by always reminding myself that it’s actually two figures AND it’s Limited. Although…I have no idea how “Limited” it is in terms of numbers produced but apparently saying the word “limited” in the title makes me snatch it up even faster. 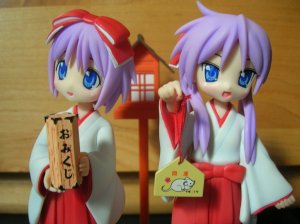 Originally I had seen the pre-orders and prototype pictures of the set in their non-limited form. Kagami and Tsukasa are sold separately with a plain base in this release. And although at the time I ADORED Lucky Star I wasn’t sold on the set…something seemed missing and I felt my money would be better spent elsewhere. Also don’t forget back then $40 for a figure was a bit too pricey for me. 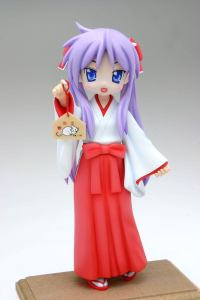 I happened to be browsing through Hobby Link Japan and found this set with the special Limited Edition Base…now normally I’m not a sucker for a special accessory but this stand was an exception. It pulled the set together seamlessly and made it into a scene rather than just a plain figure set. I really fell hard for it and pre-ordered it right away (I even got the ‘early bird special discount’). This is the first figure for me where the STAND is what made me buy it! The stand is what makes the figures go from predictable to unique in my opinion.

I adore Konata, but Tsukasa and Kagami are my favorite characters from the show. Kagami is just too much fun when she is angry or annoyed and Tsukasa is just one of THE CUTEST CHARACTERS EVER for me…Yotsuba is the only character that I think is cuter than her. 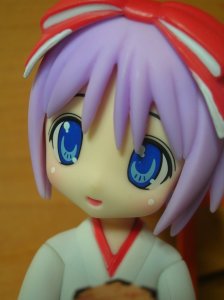 Do I have any complaints with this figure set? Only minor ones. The bush is spread a little funny on one side, as you can see from the pictures. And it was a little difficult to get Tsukasa to hold the thing you draw fortunes from. She’d hold it, but it wouldn’t rest flat on the palm of her hand easily. The bottom of it has a sticky surface that supposedly fixes that issue, but I don’t think it does too much. I almost attempted using the sticky surface to make her hold it flat, but then she wouldn’t be able to go back in the box when I move. In all honestly they just should have built it into her hand on their own. 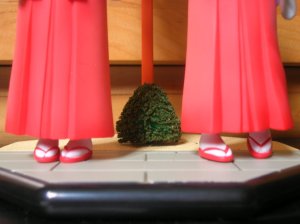 My only other complaint is that they each only have 1 footpeg and due to their outfits you can’t push down at the foot you have to grab them at the waist/legs and push with the whole figure. Nothing bad happened but it made me nervous that something I couldn’t see beneath the skirt might break.

Has a unique stand ever been the reason that you’ve purchased a figure?